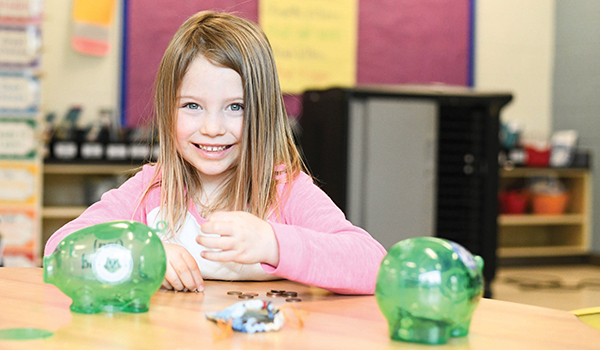 By Hannah Holliday – With three piggy banks already filled up at home, and more than $150 in savings, Vin Borsa, a Sam Adams Elementary student, is no stranger to saving.

Now, he has a fourth piggy bank made of green plastic with the Cass Kickstart to Careers logo on the side. This piggy bank sits safely locked away in his teacher, Morgan First’s, cabinet, ready to be filled with money. The money in his school-specific piggy bank will not be spent on Borsa’s routine candy purchases, but instead will be used for his future education.

In a technology-centered world where online banking and fewer face-to-face interactions with bank tellers are becoming the norm, Cass Kickstart to Careers is reinvigorating the tried and true piggy bank method.

Cass Kickstart to Careers, a children’s savings account program, is in its first year at Cassopolis Public Schools. All kindergarten students attending Sam Adams Elementary were gifted a child savings account with $25 already deposited. The interest-bearing accounts were opened at Circle Credit Union, which also gifted students their own personal green piggy bank with each child’s name on the front.

As Borsa held his piggy bank in his hands, he talked of trips to the bank with his mother and doing chores for money. He hopes to have $150 saved in his green piggy bank when he graduates.

Where it all began

Ruth Andrews, a Cassopolis resident, artist, and activist, had been researching CSAs in 2019. She reached out to Becky Moore, a trustee at Southwestern Michigan College. Moore found that the problems Andrews was trying to solve already had available solutions at the college.

Andrews continued looking for areas of need and suggested the CSAs be started for Cassopolis’ future.

Eight Cassopolis residents formed the Cass Kickstart committee. These residents, including Andrews, were involved in numerous organizations that support the community. The members sought help from Michigan Gateway Community Foundation, which recently set up similar CSAs at Buchanan Community Schools.

By working closely with Rob Habicht, the president and CEO of the Michigan Gateway Community Foundation, the Cass Kickstart committee was able to bring its vision to life.

“We care about this community, and we want it to thrive,” said committee member Margie Yarger. “This is our hometown. We are trying to build up our hometown and help the kids by giving them opportunities that maybe they didn’t have before.”

Committee member Jim Ward reflected on his own childhood experiences and how it impacted him to get involved.

He remembers his mother taking him to the bank and opening up an account. He received a contraption similar to a piggy bank, that was locked and contained a chute for pennies and quarters and another for dollars. He could open it up and take it to the bank every once in a while.

“Maybe it’s because we had these experiences as kids that we are trying to help kids who have not,” Ward said.

Getting everybody on board

To get the CSA program rolling, it was a priority for the Kickstart committee to develop relationships with the Cassopolis Public Schools superintendent, school board and teachers.

Kelly Gustafson, who is in her second year of teaching kindergarten at Sam Adams Elementary, described the excitement on her students’ faces as they put their coins and dollars into their piggy banks.

When the program was first implemented, Gustafson had students bringing in a few pennies daily. It became a ritual of sorts — she would walk to a locked cupboard, get out a child’s piggy bank and watch them deposit their coins.

The teachers have unanimously decided to make the first Friday of every month a day dedicated to making deposits into the piggy banks. Earlier this year, they sent home red envelopes with their students asking parents to send back change. They received quite the response.

Gustafson, who is still paying off her own student loans, is excited for her son to start kindergarten next year and to start saving.

“That takes a load off,” she said. “True, most of the money is going to be coming from me, but it’s in such small amounts that I won’t be missing it anyway. In the end, it’s going to be, ‘Woohoo!’ He has this money sitting in the bank waiting for him, ready to go.”

By working in collaboration with the school board, teachers are also brainstorming ways to implement a rewards program. On a monthly basis, a golden ticket winner is selected, which could be an opportunity for a financial reward, said Corey Sheet, another kindergarten teacher at Sam Adams Elementary.

Already, First has witnessed her students putting extra money in their piggy banks instead of spending it on trinkets in the Ranger Shop, which is similar to a school store.

The committee hopes as the program grows, the next set of teachers will meet the program with similar enthusiasm. The kindergarten teachers hope the children will remain excited as they get older.

“I hope it continues, and it’s something that continually gets community support, just to show the kids that there is interest in them outside of the school and value in them,” Sheet said.

Mindset over the money

For the Cass Kickstart Committee, the initial balance of $25 is helpful but not the sole purpose of the program. Instead, the program is about the thought process behind it.

“You are training the families and children that there is an opportunity beyond high school,” Yarger said. “It’s about the mindset more than the actual dollar amount.”

It is teaching an “I can do it” philosophy that some Cassopolis students and families may not have, Ward, said.

While the program does offer opt-out options, the committee has not received requests from anyone to do so.

Any student who comes to Cassopolis Public Schools as a kindergartener will also receive a children’s savings account. If a child’s family decides to move away from the school district, the account will stay open. While the program will discontinue adding to the account, it will remain open for families and students to continue to contribute.

As the Cass Kickstart Committee continues in its infancy of the program, it is making a 13-year commitment to grow and stabilize its funding needs. The committee is looking for endowments to help support its cause.

As students age, incentives and rewards will need to change to remain appropriate. For example, a fourth-grade student may get rewarded for good grades and being involved in extracurricular activities, Ward said.

The committee also wants to bring in guest speakers to broaden career exploration and present a long list of careers students could one day choose.

“When you are a child in grade school, you either want to be a teacher, a nurse or a fireman, because those are the only other people you ever relate to or see,” Moore said.

With their plastic piggy bank in her hands, Morgan Stoops, a kindergartner at Sam Adams Elementary, said she wanted to be a veterinarian when she grew up because she liked to hold animals. At that moment, in her hands, she held her Cass Kickstart to careers piggy bank, but in the future, who knows what animal it could be?

We use cookies to ensure that we give you the best experience on our website. If you continue to use this site we will assume that you are okay with this.
Cookie settingsACCEPT
Manage consent

This website uses cookies to improve your experience while you navigate through the website. Out of these, the cookies that are categorized as necessary are stored on your browser as they are essential for the working of basic functionalities of the website. We also use third-party cookies that help us analyze and understand how you use this website. These cookies will be stored in your browser only with your consent. You also have the option to opt-out of these cookies. But opting out of some of these cookies may affect your browsing experience.
Necessary Always Enabled
Necessary cookies are absolutely essential for the website to function properly. This category only includes cookies that ensures basic functionalities and security features of the website. These cookies do not store any personal information.
Non-necessary
Any cookies that may not be particularly necessary for the website to function and is used specifically to collect user personal data via analytics, ads, other embedded contents are termed as non-necessary cookies. It is mandatory to procure user consent prior to running these cookies on your website.
SAVE & ACCEPT